In the summer of 2017, Danish willow basket maker Steen Hedegaard Madsen came to Lakeshore Willows to teach basketry weaving at our willow farm in Wainfleet, Ontario.

During a series of 2-day workshops offered by Steen, he taught the participants whatever each student wanted to learn! The topics for the class of the day were limited only by the previous weaving experience and skills of each student.

Prior to the workshop, the participants spent some time exploring what basket weaving project they wanted to work on.  They brought photos or sketches with them to the class to use as a reference and Steen guided each of the participated to create the basket they were most interested in making. 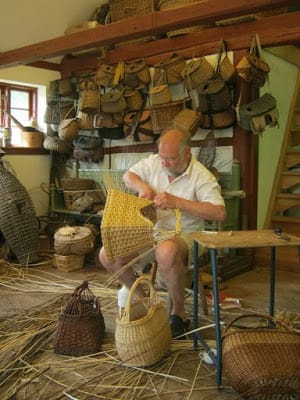 Danish willow basket maker Steen Hedegaard Madsen is well known throughout the international willow basketry community for a variety of reasons. He is indeed a master basket weaver and you will find many people who will claim that he is THE master.

In his modest way he told me that he is not a genius in any way – he has just been around for many years.

Ever since he was a young boy Steen has been interested in history and antiquity. He would play “stone age” with his friends, hunting with their homemade flint arrowheads and cooking their catch over the open fire while making more arrowheads. Later – for a total of 19-20 years – he would work at a Danish Historical Archaeological Research Center.

Maybe as a natural consequence of his interest for old crafts and skills Steen fell in love with willow basket making and is today one of the foremost experts reconstructing baskets made during a time from which no written documentation exists.

But more than that today, for those of us who desire to learn the finer points in willow basket making, he travels the World to teach us classes. Historical baskets – if that is what you are interested in – but not just that. Steen will teach you almost any kind of willow basket and bark container; you just have to ask.

Below are some examples of basket projects provided by Steen as inspiration to help the participants to get started on their search for the perfect project!

Recent Posts From the Willow Blog

Lakeshore Willows provides answers to our most frequently asked questions about planting and growing willow for basketry.

Lakeshore Willows provides you with instructions on how to build your own Living Willow Play Hut and Tunnel using dormant willow rods.

In the Summer of 2017, Danish willow basket maker SteenHedegaard Madsen came to Lakeshore Willows to teach basketry weaving at our willow farm in Wainfleet, Ontario.

Opt-in to our eNewsletter to receive updates about our willow weaving products, workshops, and events.